Storylines of the Year, No. 1: Woods wins 15th major at Masters 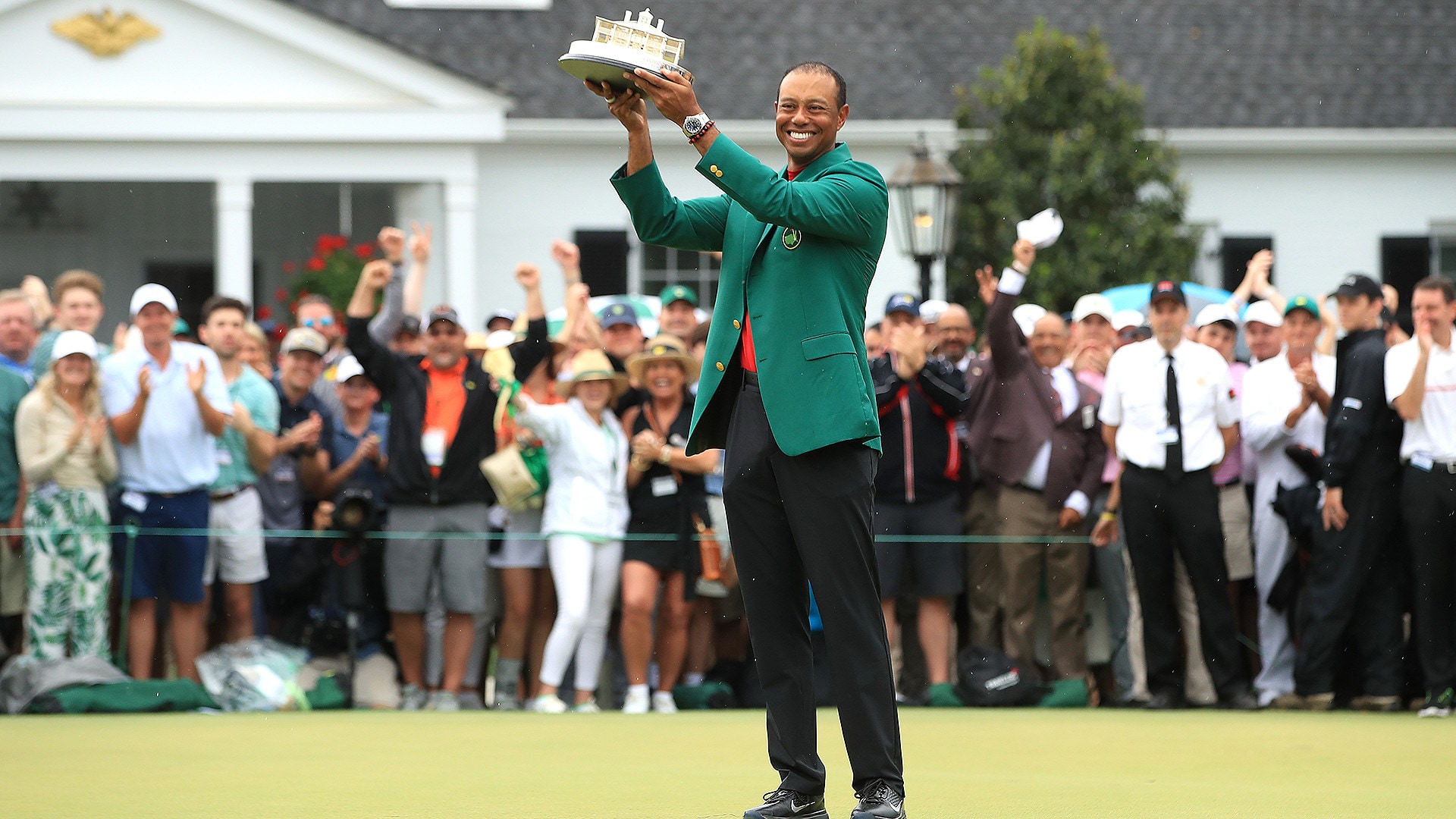 Getty Images
Tiger Woods of the United States celebrates with the Masters Trophy during the Green Jacket Ceremony after winning the Masters at Augusta National Golf Club on April 14, 2019 in Augusta, Georgia. (Photo by Andrew Redington/Getty Images)  -

And coming in at No. 1 is No. 15. Tiger Woods' triumph at the Masters Tournament was an easy selection for Storyline of the Year.

There was the three-win year in 2012. The Player of the Year campaign in 2013. The resurgent 2018. So of all the opportunities for Tiger Woods to break through and capture his 15th major, why now?

He’s brittle, with a reconstituted spine, a surgically repaired knee and countless other ailments.

And he’s been broken – physically, mentally, spiritually – by years of pain and shame.

But this is not the same Tiger Woods who entered this decade in seclusion, after the sordid details of his infidelity shattered his perfectly crafted image. Or the same Tiger Woods who labored and chopped and yipped his way to embarrassing scores. In many ways, he’s unrecognizable, emerging from a personal and professional abyss humbled, not hardened. Grateful for a second chance, not regretful for what’s been lost.

This latest comeback began in earnest in December 2017, and since then Woods has enjoyed a bonus era he couldn’t possibly have imagined a few years ago, when he was in such excruciating pain that he couldn’t walk to the bathroom or complete everyday chores around the house or play with his kids. Since then he’s been more accessible to his peers, particularly the younger generation. He’s been a devoted captain and assistant in U.S. team competitions. He’s acknowledged fans instead of staring right through them. He’s just been ... happier, as simplistic as that sounds. 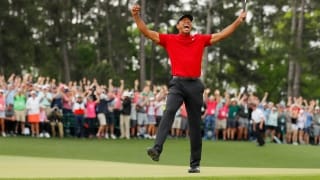 This was never going to happen. Never. Ever. And yet it did. Tiger Woods achieved what many believed was impossible, winning the 83rd Masters Tournament.

On the course, he took ownership of his game, eschewing a swing coach and relying on old feels; his action now is as good as it’s ever been. After chasing power to satisfy his ego, he finally dialed back his swing speed and put the ball in play more often. He rekindled his love affair with his beloved putter. And he relied on decades of experience, for he’s the Tour’s all-time leader in strokes gained: golf IQ.

At long last Woods seemed at peace, both in golf and in life, and that culminated in one of the biggest sports stories in history. The 2019 Masters won’t be remembered as Woods’ greatest performance, but that matters little. It’s arguably his most significant achievement, and easily his most personal. After years of injury and scandal, after all of the self-doubt and setbacks, Woods earned that long-awaited 15th major – and reminded the world that a player with his rare genius may occasionally be down, but never out.

Before the raw emotion on the 18th green, Woods needed to overcome his own history.

Sure, he was 14 years removed from his last green jacket. And yes, he hadn’t won a major of any kind since he hobbled around Torrey Pines in 2008. But there was also this: The best frontrunner in sports, incredibly, had never come from behind after 54 holes to win a major. Heading into Masters Sunday, Woods trailed third-round leader Francesco Molinari by two shots, after Woods had climbed the board each day, carding rounds of 70-68-67.

With thunderstorms in the forecast, tournament officials made the unprecedented decision to move up final-round tee times and go off in threesomes off split tees. That wasn’t a big deal to most of the field; if anything, it’d help not sitting around for hours, daydreaming about the possibilities. But to Woods, the quick turnaround presented a unique challenge in getting his achy body ready to compete. The notoriously early riser set his alarm at 3:45 a.m. – nearly six hours before his tee time – to prep for the final round.

Swinging freely wasn’t Woods’ only issue, either. Over the years Molinari had become Tiger’s nemesis, and the robotic Italian’s confidence was never higher after outdueling Woods to win the 2018 Open, going 5-0 at the Ryder Cup and then taking the Bay Hill tournament a few weeks earlier.

Staked to a two-shot lead at the start of the day, Molinari had maintained that advantage over Woods as he entered Amen Corner. Seven holes from another major title, Molinari made a stunning blunder on the diabolical 12th hole. His tee shot never had a chance and came up short, in Rae’s Creek, while Woods safely found the green and two-putted for par to tie it up.

Molinari rebounded on the next hole and matched Woods with birdie, but then made another gaffe on 15, when his third shot into the par 5 clipped a branch and dropped into the pond fronting the green. Molinari walked off with a double bogey, dooming his chances for a green jacket.

In all, six players held at least a share of the lead on the second nine, but Woods was at his cold, calculating best and didn’t squander the opportunity. He calmly two-putted for birdie on 15 to nudge in front, then hit the shot of the week – a sky-high iron into 16 that rode the ridge and wound up 2 feet away for a kick-in birdie. A bogey on the 72nd hole left Woods with a final-round 70 and a one-stroke victory over three players, including two of the top four players in the world, Brooks Koepka and Dustin Johnson.

When the final putt dropped, Woods thrust his arms in the air and screamed, “WOOOOOOO!!!!!” Behind the green he bear-hugged his 10-year-old son, Charlie, in a scene that immediately recalled Woods’ emotional embrace with his own father in 1997. Fellow Masters champions Bernhard Langer, Trevor Immelman and Adam Scott hung around to congratulate Woods in the scoring area, as did Justin Thomas and Rickie Fowler – South Florida pals who were instrumental in helping Woods get off the couch and back in game shape – and PGA Tour commissioner Jay Monahan.

The conversation immediately shifted to 18 majors, and whether Woods could make a serious, late-career run at Jack Nicklaus’ hallowed mark.

“I’m sure that I’ll probably think of it going down the road,” Woods said afterward. “Maybe, maybe not. But right now, it’s a little soon, and I’m just enjoying 15.”

So was everyone else.

Witnesses to a comeback for the ages, the patrons chanted Woods’ name as they headed toward the exits. 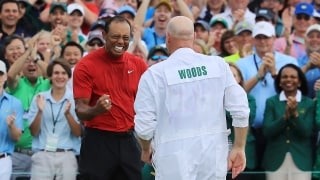 Tiger's fifth Masters triumph, a scene unlike any other

Tiger Woods' family and peers gathered to watch Woods' fifth Masters victory on Sunday at Augusta National, a moment many thought was no longer possible. 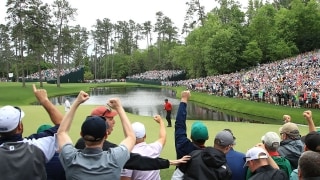 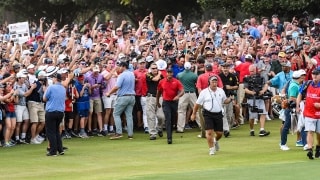 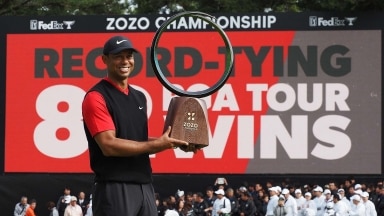