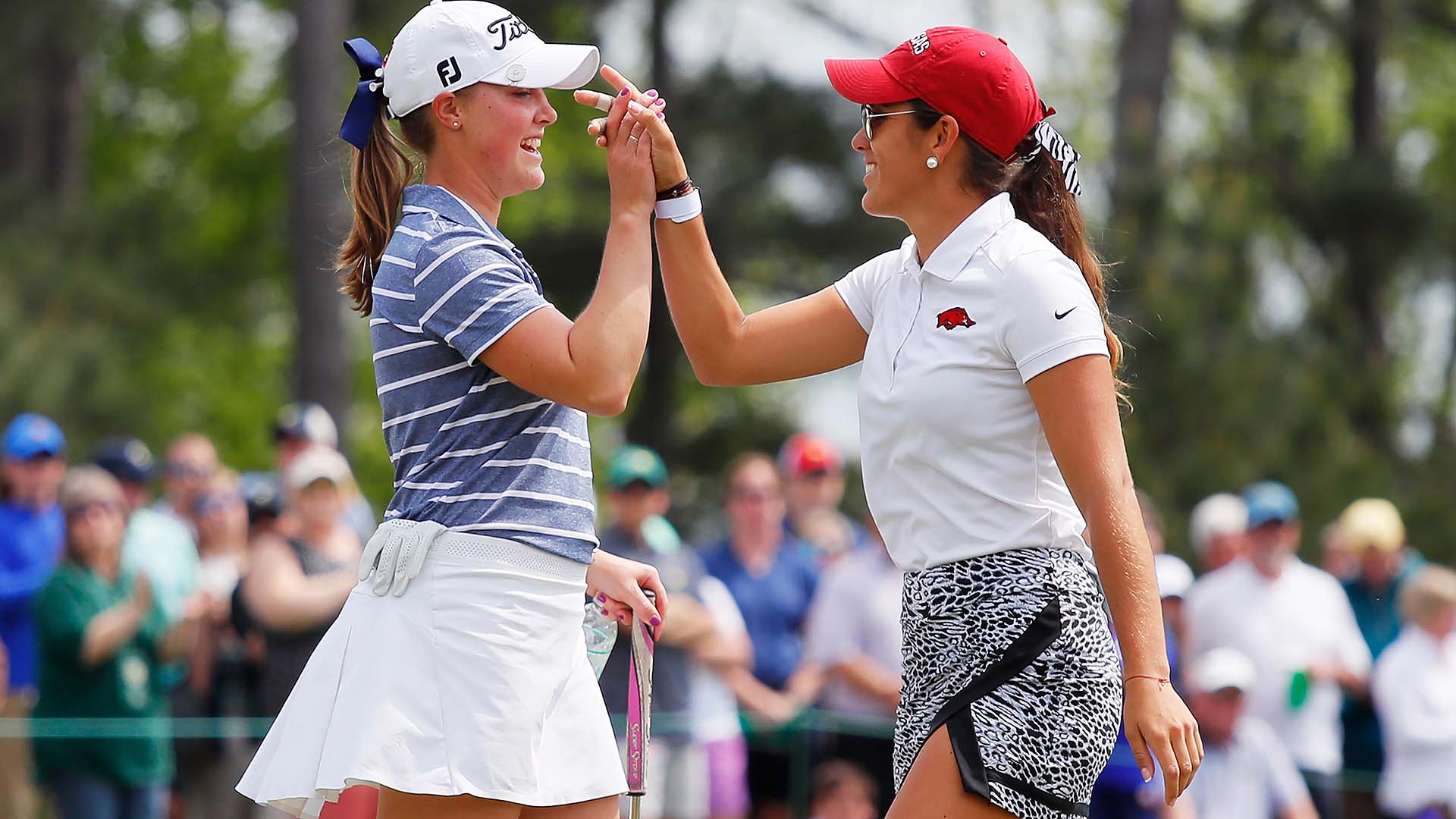 GolfChannel.com is counting down the top storylines of 2019. Here's a look at Nos. 6-10, with the top 5 being revealed individually each day this week. We've also included some honorable mention storylines that may have missed the cut but helped to shape 2019. 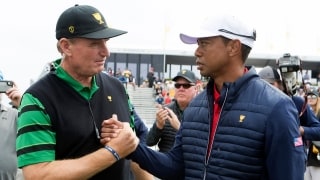 Els' loss to Woods hurts as much as it ever did

Tiger Woods spent a career beating Ernie Els with his golf clubs, and now he’s bested him with an earpiece.

After another American rout in the 2017 Presidents Cup, the biennial competition felt like it was receiving its last rites. Then came the announcement of the 2019 captains: Tiger Woods (U.S.) and Ernie Els (Internationals). Well, now, that's intriguing. Interest was struck up again in the matches, and as the year wore on, there was constant chatter about who would make the team, who would get picked and if Woods would serve as a playing captain.

The hype was good for an event that is often overlooked, but the actual competition needed to excite – and it did. Els' team looked poised and powerful, and seemed primed to win for the first time since 1998 at the same venue. But Woods and Co. dominated the Sunday singles to keep the cup in American hands.

Thanks to the pair of Hall of Fame captains, and their histories with one another, the 2019 Presidents Cup stood above previous editions. While there was plenty of emotion and excitement, and controversy, relating to the play, the captains were the focal point. Their pedigree, their rivalry, their decisions – they drew the attention. Els was driven, desperate to win both for his team and for himself. Woods was clinical, leading by example with a 3-0 playing record and calming his team through three days of deficits.

In the end, and again, Woods bettered Els. But for the first time in a long time, when people were talking about a men's cup, it was the Presidents, not the Ryder.

Suzann Pettersen couldn't have drew it up any better. After her clutch putt to seal the Solheim Cup victory for the Europeans, Pettersen announced her retirement and wrote the perfect final chapter of her career.

It’s the type of hypothetical moment that can fuel hours of practice: a single putt to win the match, clinch the title and bring glory to your team. Suzann Pettersen didn’t blink when faced with that very real challenge in the Solheim Cup at Gleneagles, and then she promptly decided it would be her final competitive stroke.

Pettersen’s mere inclusion on Catriona Matthew’s European side was a point of debate entering the matches in Scotland. The 38-year-old Norwegian gave birth to her first child in August 2018 and took the next 19 months off for maternity leave. She made only one cut in three stroke-play starts before Matthew tabbed her as a captain’s pick, hoping that Pettersen’s veteran presence and fiery demeanor would help guide a roster with three rookies looking to win back the trophy.

Pettersen split her two team matches alongside Anne van Dam, and her singles match with Marina Alex proved to be the deciding point as Europe closed with a late rally. The situation was simple as Pettersen faced an 8-foot birdie attempt on the 18th green: miss and Alex was assured of a half-point that would let the Americans retain the cup; make and the trophy returned to Europe.

Pettersen’s putt rolled true, and as the ball disappeared she dropped her putter and raised her fists in celebration. Moments later, riding the competitive high of a career that included two major titles, she abruptly called it quits.

“I think this is the perfect closure,” Pettersen said. “It doesn’t get any better. Yeah, this is it. I’m completely done.”

Rarely are athletes in any sport afforded the opportunity to walk away on top. In doing so, Pettersen not only solidified her hero status inside the European team room but she also etched an indelible moment into Solheim Cup lore. 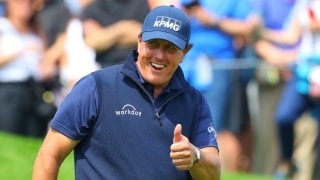 While his on-course form largely plummeted following his win at Pebble Beach in February, Mickelson became something of a revelation when he fully embraced social media.

Mickelson joined Twitter in late-2018, but it was this year that he rocketed into the upper echelon of the game’s best online follows. From the Phireside chats to his impromptu video lessons, poolside wine ratings and regular interactions with fans, Lefty’s status as a social media all-star was cemented in short order.

And Mickelson wasn’t afraid to pick up his phone at the biggest events: there was his video roasting of Matt Kuchar while driving down Magnolia Lane before the third round of the Masters and the ardent effort to set a thumbs-up record over the weekend at the U.S. Open.

But the social media antics also helped to take some of the heat off his declining form, as Mickelson failed to notch a single top-10 finish after his win at Pebble. It was on Twitter that he announced a “hard reset” and weight-shedding fast ahead of The Open, and it became a frequent outlet for him to display his newly-ripped physique while dropping in excess of 30 pounds – all while keeping his calves in tip-top shape.

In November, Mickelson dropped out of the top 50 in the world rankings for the first time in 26 years, and as his 50th birthday approaches there are still lingering questions about how much longer he can remain a consistent force inside the ropes. But in 2019 he made it abundantly clear that Mickelson the Tweeter still has plenty of game.

Avoiding football’s long shadow and creating a championship season may have been the primary goals of the new schedule but the added benefit of top players playing more is certainly a pleasant byproduct.

The 2019 PGA Tour schedule was like none that preceded it. From an earlier postseason to the return of The Players to March and the move of the PGA Championship to May, it was an itinerary that asked creatures of habit to craft some new plans.

The adjustments meant a more condensed run of important events, with players circling one week in every month from March through August. Rory McIlroy’s victory at TPC Sawgrass and Brooks Koepka’s successful title defense at the PGA lent some high-profile champions to two big events getting used to new spots on the calendar.

But condensed doesn’t necessarily mean better. As the summer wore on, some stars lamented the new construct. McIlroy opined that the new format potentially put too much emphasis on a handful of the biggest events, while Justin Rose spoke out at The Open and criticized the FedExCup as a motivating factor for the revamped schedule – all while still in possession of the Tour’s season-long trophy.

“As a professional in terms of trying to peak for something, the process that’s involved in trying to do that can be detailed and it can take longer than a month,” Rose said.

A new schedule also meant some difficult choices as top players balanced a need for rest with the desire to peak at the right time. Phil Mickelson skipped Torrey Pines for the first time since 1990, while Tiger Woods wasn’t a part of the first WGC event in Memphis. Woods’ second half was notably light on starts, as he played only one non-major in the 15 weeks following his Masters triumph.

Add in the race to make next year’s Ryder Cup and the return of the Olympics in Tokyo, and the 2020 schedule might seem even more hectic than its predecessor. The adjustment to new patterns and tournament dates remains a work in progress, even for the game’s best, and it’s a storyline that won’t go away anytime soon. 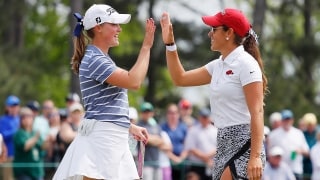 There were plenty of firsts at the inaugural Augusta National Women’s Amateur. Sure, it was the first time a women’s event was contested on the famed Georgia layout. And it was the first time that amateurs had the stage to themselves at a place built by the greatest amateur the game has ever known.

But by the end of the week, the discussion shifted from the barriers being broken to the shots being struck and the putts being holed. It was a spectacle of shot-making from the best female amateurs in the world, highlighted by the duel between Jennifer Kupcho and Maria Fassi that captivated Amen Corner. The two went toe-to-toe across the second nine, with Kupcho finally breaking from the pack with the tournament’s most memorable shot: a ripped hybrid into the 13th green that set up an eagle.

It’s the kind of shot we’re used to seeing with a green jacket on the line, and it immediately ushered the ANWA into Augusta National’s decorated archive of memorable moments. The women more than held their own on the hallowed grounds, and the sportsmanship and talent displayed in equal measure won’t soon be forgotten.

Whatever expectations existed for the first-year event were exceeded, and the stage is now set for the tournament to become an anticipated portion of one of the sport’s most high-profile stretches.